This weekend, the weather was just perfect for flying.  Not too hot, not too cold... and just a few clouds to keep it interesting.
I wanted to test out some iPad Apps and test out some new camera equipment.  So I asked my buddy Ryan to join me. Since he has not been in a small plane much, I thought he would enjoy the view and be good assistant cameraman ;-)
We got an early start on Sunday and I think I may have burst Ryan's bubble at the hanger when I put him to work pulling the Cirrus out of the hanger and helping with the preflight.
I have the Best Cirrus tug in the world on order... But it hasn't arrived yet ... So we did it the old fashioned way... (Some brute force and a wimpy little tow bar.)
After the plane was prepped and ready to go, so were we: 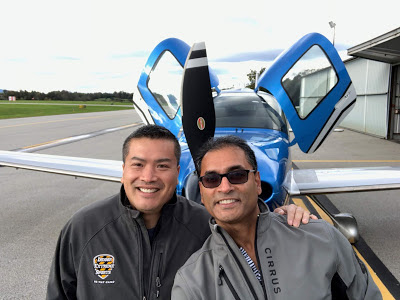 Once preflight was complete and the cameras were setup, we were ready to go... Ryan had flown in a Cessna before... But this was his first flight in.a Cirrus.  After I briefed him on the parachute and the avionics deck, he was blown away as you can see below: 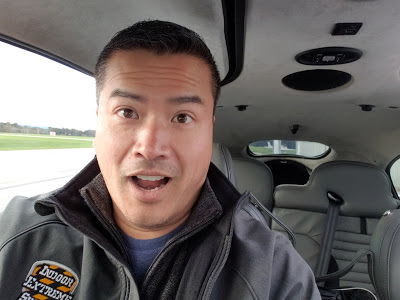 As soon as we took off, I realized what a crazy, windy day it was.  While there was no rain and the clouds were high enough not to be relevant, the winds were crazy! We had 30-40 knot winds @ 1500 Ft of altitude.  Luckily Ryan was OK with a few bumps and we pressed on.  He looks pretty calm here doesn't he?? 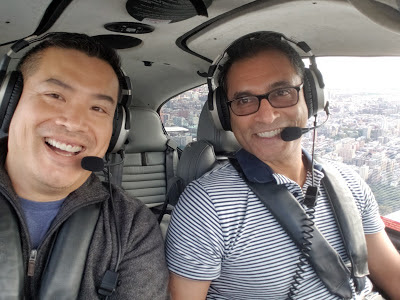 The first stop today was going to be some simple VFR flying in the Hudson River Corridor.  Even though I have now flown this route many times, I never get tired of the views of Manhattan and doing 360s over the Stature of Liberty! 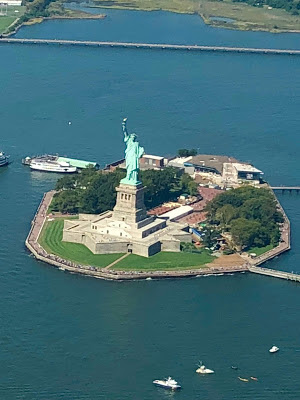 With the sightseeing portion done, now it was time to dodge some airspace and head out to Long Island.  We stayed low just offshore and out of the way of JFK traffic.  We saw the Jones Beach Monument and Amphitheatre up close @ ~ 1300FT then climbed up to 7500 FT to get on top of the clouds before approaching Farmingdale's airspace.
After that, I realized that going to Montauk would be waste because the clouds would not make it viable to see.  So instead, I took this opportunity to play with some apps.  The Garmin Pilot and Foreflight apps are both amazing and work really well with the panel mounted avionics in this Cirrus.
In fact, this plane has soo much gadgetry in it, that I felt more like a programmer that was testing code and then making code tweaks when the system did something unexpected.  .... I have high hopes of mastering this Perspective Plus the way I mastered the Avidyne R9 flight deck.  So far, I can tell this is way more powerful but also a bit more complex of a user interface.  (In fact, I think the Garmin engineers could learn a thing or two about elegant design from Avidyne)
Then it was time to go home... I wanted to fly an approach however, the winds had other plans.  While heading back to POU, the METAR was showing 320 @ 15 gusting to 20 Knots! Unfortunately, there are no approaches to runway 33 and the notams even said the VASI lights were out.  So we had to do an old fashioned visual approach and landing.  While every pilot certainly knows how to do this, I am actually more comfortable flying instrument approaches... So this was fun!
We captured the landing on multiple video cameras but I haven't had a chance to edit the video yet.  I hope to start posting landing videos soon on my Youtube channel... So stay tuned.
Cheeers,
== T.J.==
at October 21, 2018