Home Just in Time for Maintenance

After the return trip from Palm Springs, I realized I had reached home "just in time" for some critical maintenance.
My final round trip journey was in excess of 4000 nm, as you can see below: 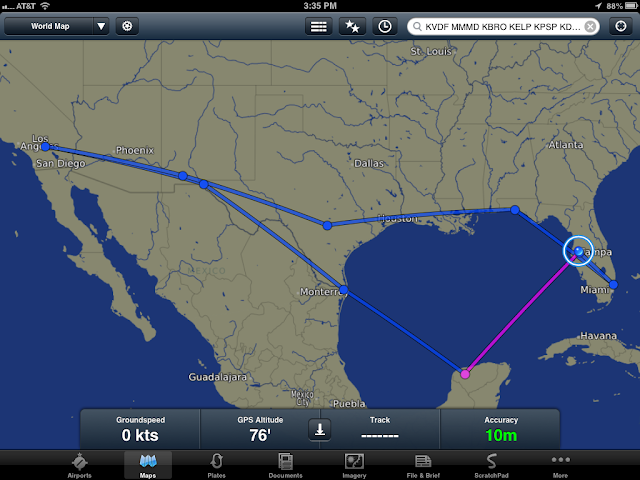 Before the trip I made sure all the maintenance was current and even had my mechanic go over the plane in detail.
Until the very last leg of the journey, everything was working flawlessly.  However, the last hour wasn't so pleasant.  For starters, the A/C stopped working.  I know... I know ... hardly a crisis ... But it was Florida and rather warm out.  No worries, I pressed on.  Then a funny engine indicator popped up on the R9.  The Turbo Inlet Temperature spiked to 2000 degrees! 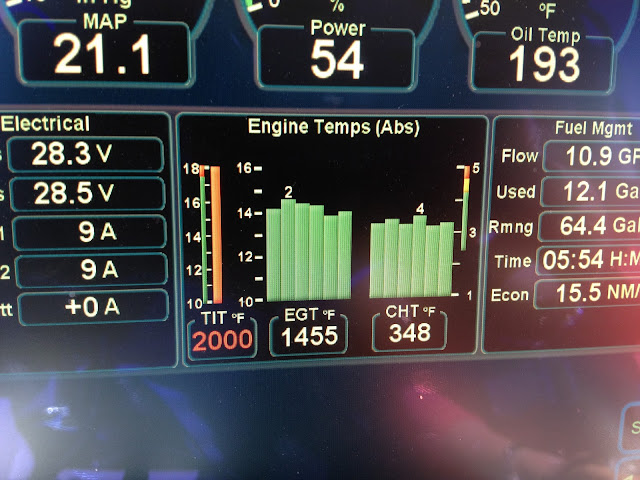 Yikes... I had never seen this before!  But surprisingly, everything else was looking, sounding and feeling normal.  Since I was less than 100 miles from home, I reduced power to about 50% and stared at the engine indicators the rest of the way.  I suspected a minor sensor problem because the turbo temp was fluctuating ~ 500 degrees up and down in a matter of seconds.  But I wouldn't know for sure till I was on the ground and the cowling was off.
Later on the ground, my regular crew @ Leading Edge confirmed that the Turbo Inlet Temperate issue was indeed just a minor sensor issue.  However, with the cowling off, they found something else that was not apparent to me, yet quite serious: 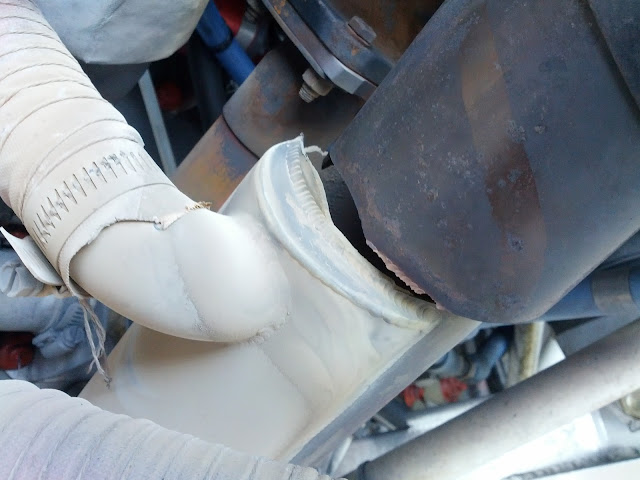 There was not just a crack, but rather a serious separation in one of the exhaust pipes.  This could have been quite unpleasant for me at some point really soon. So I was glad that the sensor problem uncovered this!  I am even more pleased about how lucky I was that this didn't cause a more serious issue during my long journey.
Now after a week, everything is fixed and the plane is back in the air... Time to plan the next journey!!

After an overnight in El Paso and a full regular day of work, it was time for the final leg of the journey.  El Paso turned out out to be a great place for an overnight stop.  Thanks to both NASA and the military there was no shortage of noteworthy aircraft on the ramp.  The coolest plane on the ramp had to be the NASA plane that the FBO staff refers to as " Shamu".  You can see why in the pic below: 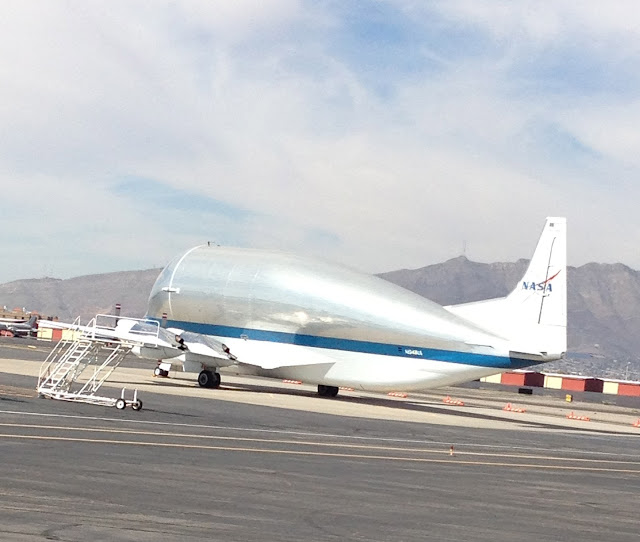 The flight from KELP to KPSP was totally uneventful.
But the landing into Palm Springs was a bit exciting.  I was surprised to find that Palm Springs has no usable precision approaches. This is probably because it is in the desert and doesn't really need them.  They did have 3 RNAV RNP approaches, which I was not authorized to fly and a VOR GPS-B approach to runway 31L.  I had never seen a VOR GPS-B before.  So naturally, like any curious kid,  I asked ATC for it specifically.  For some reason, ATC didn't want to grant my repeated descent requests until I was rather close to the Thermal VOR.  This meant I had to descend @ ~ 1000-1200 FT/min all the way to the runway!
I used the Cloud Ahoy app again.  Unfortunately, I didn't remember to turn it on until I was climbing out of 12K ft. As such, only the partial flight recap  is available on their server :-(
I need to add it to my checklist for the trip home.... 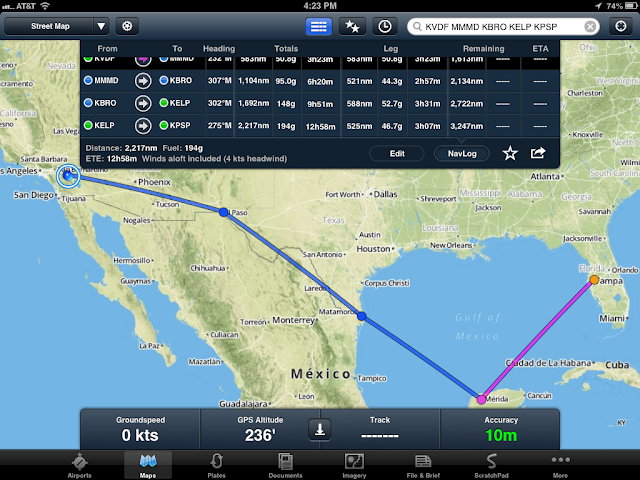 But for now, after the 2217 nautical mile trip, it's time to enjoy Palm Springs and the AOPA Summit (registration and the parade of planes starts tomorrow)!
Cheers,
==T.J.==
at October 09, 2012 No comments:

My trek to AOPA is now well underway!
The first leg of this trip was quite memorable. Since I was flying direct over the Gulf,  I squeezed as much fuel as I could into the tanks (92 gals). Other than the eAPIS filing, the departure was just like any routine IFR trip anywhere in the US.
However, things started getting interesting as I was enroute.  When I was ~ 200 miles off the coast of FL, Miami center told me that I would "probably lose radio and/or radar contact" soon and gave me lost comm instructions for Houston Center and Merida Center.  Not exactly what I wanted to hear over open water!
For about almost an hour, I did lose radio and radar contact with everyone and the only thing I saw was blue sky, blue water and a couple of stray cargo ships.
When I reached my reporting point, I still couldn't reach anyone @ ATC.  However, I was able to reach a United pilot (flight UA792), who was in the same vicinity and about 20K FT above me.  The friendly United pilot relayed a message for me to ATC and I felt like I was back in civilization!
This was also around my point of no return.  I had figured out the point at which I would need to make a hard decision about whether I would make it to Mexico or need to turn around and go back to Florida due to fuel concerns.  I think every pilot thinks about this (or should think about this) when flying over open water. 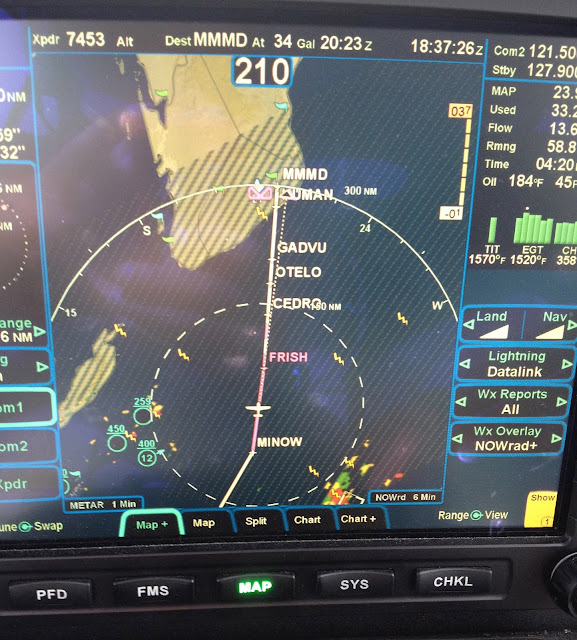 Luckily the weather was good, the headwinds were tame and the R9 was projecting more than enough fuel.  So now I was committed to landing on the Yucatan peninsula!
The arrival was a simple visual approach that was quite scenic and may make a good YouTube video soon.
After landing, the beuracratic fun began.  I parked right next to a beautiful Phenom 100 and was greeted by an FBO Marshall, named Juan Manuel.

He was very friendly and helpful.  However about 20 feet behind Juan Manuel, were 2 very serious Mexican military officers, who seemed to take pride on how thoroughly they searched my plane ;-)  Here is one of them scrutinizing my passport with the Phenom in the background: 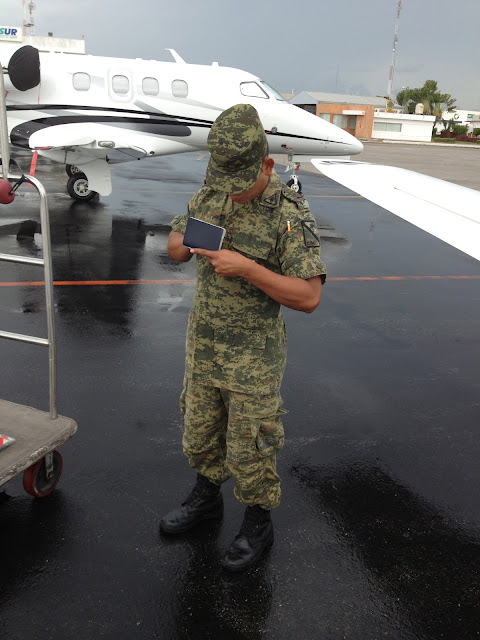 They didn't smile once during the entire process! But it was no problem... With my really bad Spanish, and a little translation help from Juan Manuel, I managed to escape the plane inspection in ~ 10 mins.
With passport and bags in hand, I walked about 200 FT to the customs building, where I found the traffic light that Guillaume had mentioned in the briefing pack. You can see the airport staff showing me below: 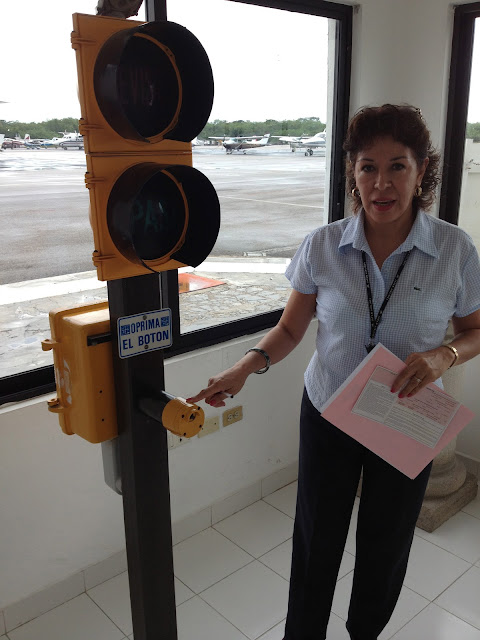 I crossed my fingers as I pressed the magic button below the traffic light.
Apparently, it is a random light that shows red or green when you press the button.  If it is green, they do NOT check your bags.  But if it is red, they do a thorough search of ALL of your bags.
As luck would have it, it was red for me:-( As a result, they opened and thoroughly inspected my backpack, my roll bag and my camera bag.  They were quite friendly and efficient and the whole search took less than 5 minutes.

Apparently, I had to meet the commandante,who is sort of the head honcho in charge.  He had to sign off on all the inspections done so far and "recheck" my airplane paperwork.  I waited for ~ 15 mins in total comfort in the FBO lobby, which was quite comparable to the US FBO lounges that Banyan/Signature/ or TAC Air would have.

Eventually, the commandante arrived and informed me that my paperwork "appears to be in order" and told me to sign the 4 copies of my Mexican entry permit. 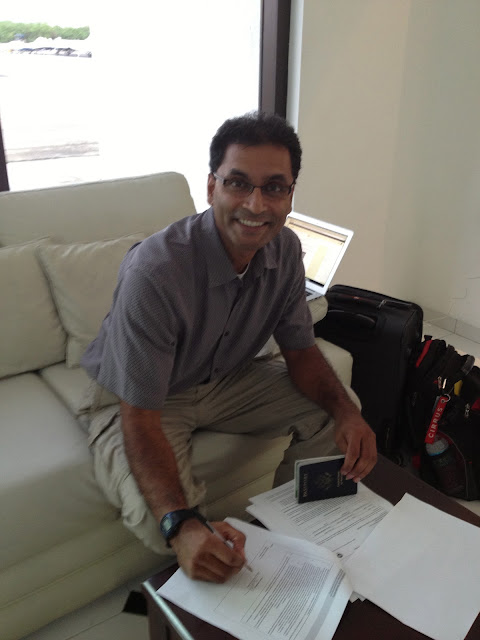 Actually, all the paperwork was in Spanish... So who knows what I signed ;-)

Overall, it was rather quick and painless and now this makes country #6 that I have personally landed in!
Time to take a break from flying and go see some Mayan ruins...

Stay tuned for the next leg of the journey.

Preparing to Cross the Next Border (Mexico)!

After my European excursion, I was looking forward to the next challenge, which will be crossing another border on the way to AOPA Summit in Palm Springs.
Once again, I enlisted the help of Thierry and Guillaume at Air Journey to help with the route planning and logistics.
Here is the routing, we came up with: 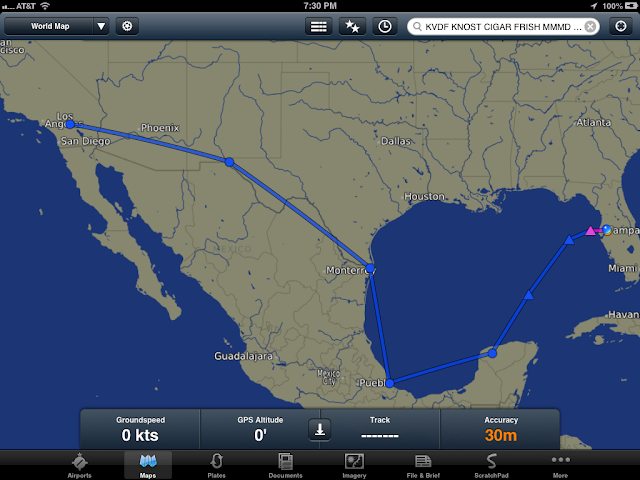 The first leg will be a 610 nm journey directly across the Gulf of Mexico to Merida, Mexico.  This will be my longest overwater leg to date!
In advance of this trip, I got everything prepared I could think of:
On the Plane: A fresh oil change and a quick trip to Lopresti in Sebastian for some long overdue adjustments on the Ice Skates made the plane ready... But to be sure I performed perhaps the most time consuming and thorough pre-flight ever!
In the cockpit: I got my emergency gear ready, including PLB, life jacket.  If I can get one in time, I also hope to have a raft with me. In addition, the usual cadre of camera equipment and miscellaneous gadgets.
Paperwork: Thanks to Guillaume, I received an outstanding briefing pack with all the paperwork required by both US and Mexican governments. But more important than the bureaucratic paperwork, was Guillaume's detailed instructions, which included photos of what to expect as well as some unofficial commentary ;-)

Hopefully, the preparation will have been sufficient and I will be able to post a progress report on the trip sometime this weekend.
Stay Tuned...
== T.J.==
at October 04, 2012 No comments: