After spending entirely too much time in China during the past month,  I was finally able to squeeze in a good IFR x-country trip.  There was a meeting in Vegas that I wanted to attend and conveniently New Mexico was sort of on the way ;-)
The routing was fairly direct, as you can see below: 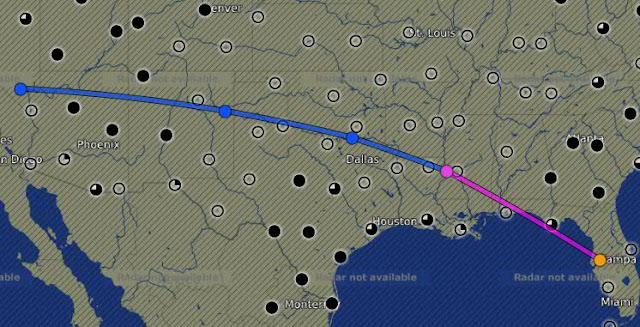 I could  have done the journey with 2 stops.  But instead, I chose an extra halt so that I could stop @ familiar places where I knew the FBO hospitality was good and the gas was cheap.  Both TVR and DUA fit that purpose.
Along the way, the weather was perfect... Well almost perfect... Most of the journey was clear, blue sky.  However, there was one line of ugly weather that I had to cross.  As you can see below, there was just no good way around it. 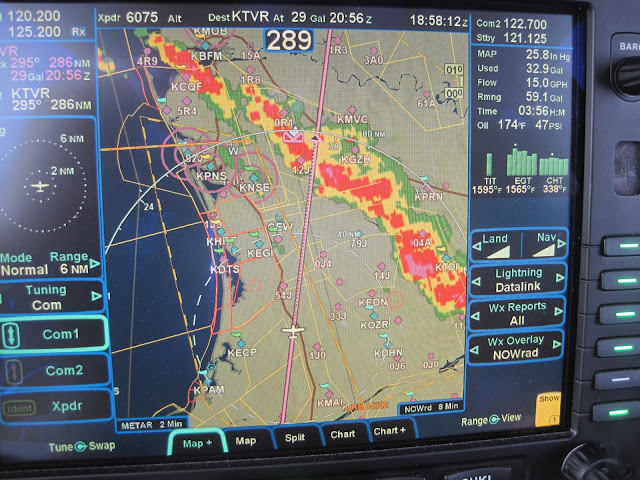 So I used all of the enroute weather info I could get from ATC, Flight Service and the onboard  R9 weather.  Then I used the vector mode of R9 to dodge and weave through the line. 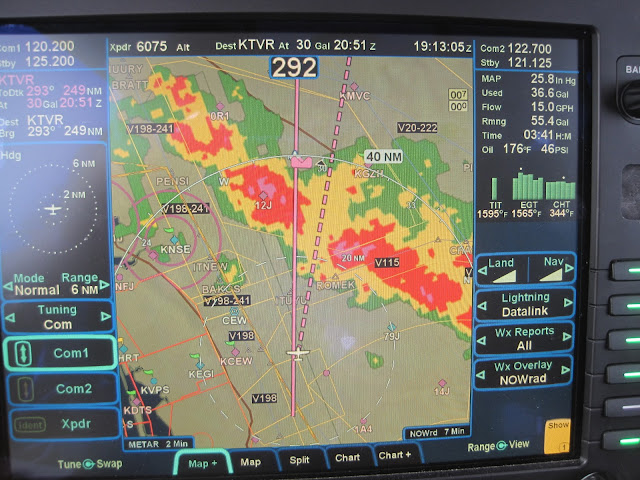 In the end, I encountered only moderate rain and light chop.
Aside from that brief weather encounter, the rest of the journey till New Mexico was uneventful.

As far as New Mexico, I wanted to land somewhere in the northern part of the state so that it wouldn't be too far out of the way.  So I decided to stop @ Tucumcari, NM.  It was a rather spartan airport with quite a bit of construction going on.  But it was still a good rest stop and more importantly the official 49th state!

After NM, the final leg to Las Vegas turned out to be the truly memorable part of the trip for a couple of reasons.
First, I was able to fly directly over the Grand Canyon, which is a restricted special flight rules area.  This was due to a friendly ATC controller from Denver Center who was willing to work out a clearance for me.  The views were awesome!  You can see some of the pix in the album below:
The second reason this leg was memorable was the "excitement" of the approach into Las Vegas.  When I was ~ 30 miles out, I requested the GPS 30L approach to North Las Vegas.  ATC was quite busy and basically said "NO... Go Away".  In fairness, ATC was a bit more polite than that, and since the weather was clear, I was not concerned.  But the troubling part was that ATC wouldn't give me a clearance to descend until the very last minute.  I was ~ 12 miles away from the airport and still level @ 10,000 FT!
At that point, ATC asked me "IF cleared for the visual approach to 30L via the left downwind, could I make it without having to do a 360".  With the most confident radio voice I could muster, I said "Affirmative".  After ATC gave me the official clearance, I pulled the power to idle, applied full right rudder and did what felt like a "nose dive".  With a descent rate of ~2000+ FT/Min I aimed for the midfield point of the left downwind!
While I have practiced emergency descents before, this was the first time it felt real. I was at idle power almost the entire way to a full stop landing!  Unfortunately, it happened so quickly, I didn't get a chance to setup the cameras to capture the amazing view of the strip as you land.
In fact, when I was on final, I contemplated declaring a missed approach just so that I could circle around and take some pics... But I decided not to, thinking that might be a bit rude to ATC ;-)
Next time, I guess I will need to setup the cameras before takeoff!

Email ThisBlogThis!Share to TwitterShare to FacebookShare to Pinterest
Labels: Trips