I spent this week in NY, specifically in White Plains, which is just on the northern edge of the New York Class B airspace frenzy.  But more importantly, it is also the home of IBM Flight Operations.  The IBM fleet consists of a number of aircraft, including Gulfstream 550s, Falcon 200s and even helicopters.  As you can imagine, they have an enormous hanger to house this little fleet. 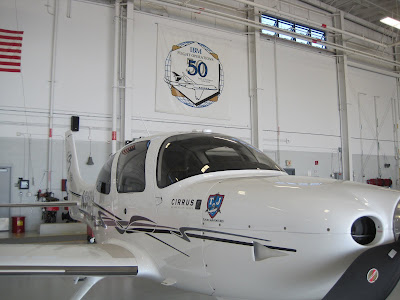 As you can see above, I was lucky in enough to arrange a tiny corner of the hanger to call home for the week.  In the photo below, you can see me with the CEO's G550 in the background. 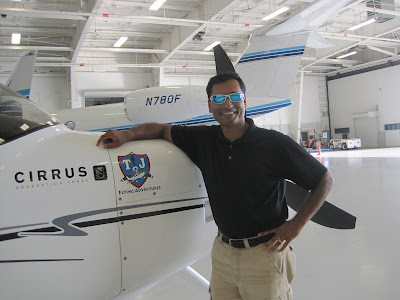 Actually, the G550 is such an enormous and impressive plane, that my Cirrus could have fit under the wing.

Even more than the aircraft, the IBM Flight Operations staff are really impressive!  They have several dozen staff on the crew and they run a "mini airline" with everything from full maintenance, avionics work, to catering, planning, dispatch etc.  The entire crew showed me some incredible hospitality this week, which I truly appreciate!

The night before my trip home, I wanted to do a "fly-by" of the NYC skyline along the Hudson River.  I had read about this scenic route in numerous magazines and was eager to experience it firsthand.  There is an FAA procedure that has been established for this route that is very simple to follow.

Even though the procedure is not complicated, I went with a friend (Steve), who is a local pilot.  This gave me a safety pilot on board.  In addition, it gave me an extra set of eyes for traffic and another photographer on board.

If you have the opportunity to try the Hudson Corridor, I highly recommend it... The camera simply doesn't do it justice!