Holding Pattern Without a Shuttle View

As everyone knows, today was the day for the space shuttle's last mission.  I didn't have tickets to see the launch in person.  But I really wanted to see it.

So I came up with what I thought was a clever plan.  I would fly the Cirrus upto 17,000 FT and go into a holding pattern "near" the launch site.  Of course, "near" meant I had to stay clear of the TFR (temporary flight restriction), which was a 30 mile ring around the launch site.  That would still give me a memorable view and hopefully even some pictures/video.

Unfortunately, this plan didn't quite work as I had hoped...

The weather in FL was lousy today!  Not as bad as a hurricane or a convective sigmet.  But plenty of clouds, rain and lots of dreary overcast.

Ever the optimist, I filed an IFR flight plan and decided to try it anyway.  I was hoping to get above the clouds where I could get a view.

When I filed the IFR flight plan, I wrote "Training flight: practicing holding patterns @ COKES" in the remarks section.  COKES is an intersection just off the FL east coast near Flagler County airport that was just outside of the TFR.

When I arrived at the airport, I did my preflight inspection under some very nasty looking clouds, which you can see below: 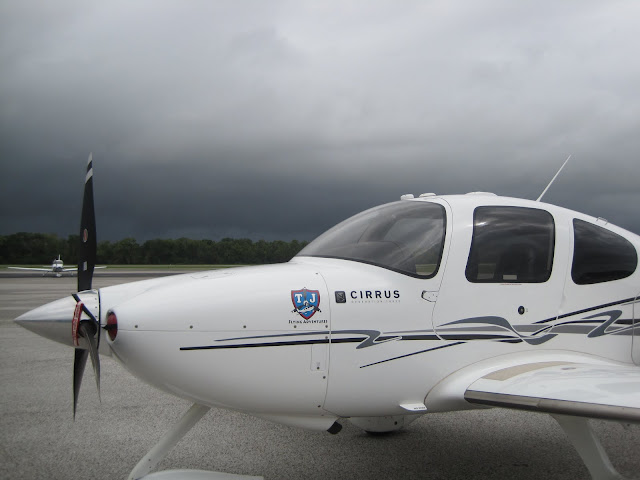 As luck would have it, as soon as I finished my preflight and closed the door, it started raining! 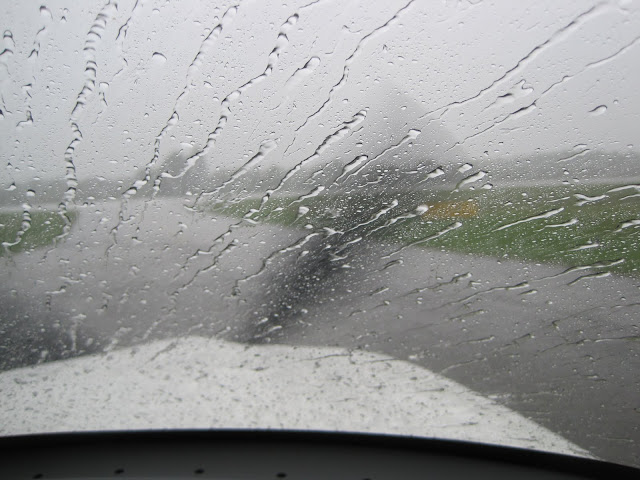 As I waited for my IFR clearance, I watched another Cirrus land in the rain.  I checked all of the avionics one more time and then was ready for takeoff.  Taking off in the rain is bit unusual because there is really not much to see out the window and you have totally rely on instruments moments after rotation.

After I was airborne, the next hurdle was ATC.  They were quite busy today due to the weather and several other aircraft maneuvering to do the same thing as me.  Initially, they only cleared me to 5,000 FT, which was right in the middle of a cloud layer.  Aside from the training/practice value, this was rather unsatisfying.  There was absolutely no view and it was so bumpy I couldn't even play with any camera equipment.  I asked 3 different controllers for a higher altitude.  Each one told me to "standby" then later said "unable" due to traffic or some other excuse.

Finally, I got handed off to the Daytona Approach control, where I encountered a much more cooperative controller.  Despite my "disguised" flight plan, he knew exactly what I was doing and was eager to help.

He gave me a clearance to 10,000 FT and told me to hold over Ormand Beach Airport.  I happily complied and setup my cameras.  Unfortunately, even @ 10,000 FT, there were too many clouds to see anything.  ATC was unable to clear me any higher due to "inbound international arrivals".

So after all the effort, I didn't see or even hear the launch!

But the trip was definitely not over.  I still needed to fly home and the weather continued to add drama to the trip.  You can see both the TFR (with the RED ring) and the weather in Tampa on the screen shot below. 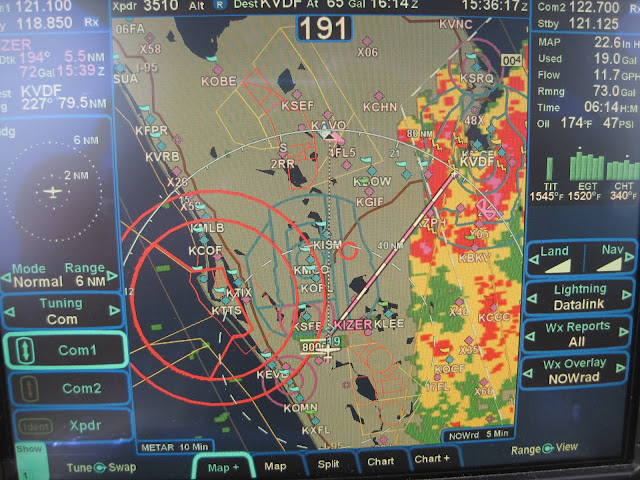 The rain was fairly heavy and I flew the GPS23 all the way down to 450 FT before I could even see the runway!  As I got to the runway numbers, I realized I was a little high.  Since the runway was longer than I needed, I just floated a little and landed slightly long.... You can see for yourself in the video below:

After I got home, I finally watched the launch on CNN...  Even though I didn't see it live, I got some great weather flying experience today!