Today was one of those traditional $100 hamburger days. An IBM colleague of mine (Richard) was visiting from Spain. He has heard me rave about flying for years and I thought today was the perfect day to show him firsthand.
The plan was either to fly to Key West or Palm Beach, both of which are gr8 $100 Hamburger destinations. When Richard learned that Disney was right on the way to Palm Beach, the decision was clear. He had just bought a new camera and was eager to try it out en route over Disney. However, I warned him that there is a temporary flight restriction (TFR) over Disney, which may hamper the photo opportunities.
Interestingly, the Disney TFR is not so temporary. In fact, it seems to be a permanent restriction that prohibits all aircraft from surface to 3000 FT. (I guess Mickey doesn’t want anybody buzzing Cinderella’s Castle).
But I had a trick up my sleeve that I was hoping would result in a legal way to get into that TFR airspace.
When we were ready for takeoff at Tampa Executive there was a broken cloud layer @ ~ 5000 FT. We climbed through a nice big whole in the clouds @ ~ 1000 FT/min and enjoyed a smooth ride at 5500. 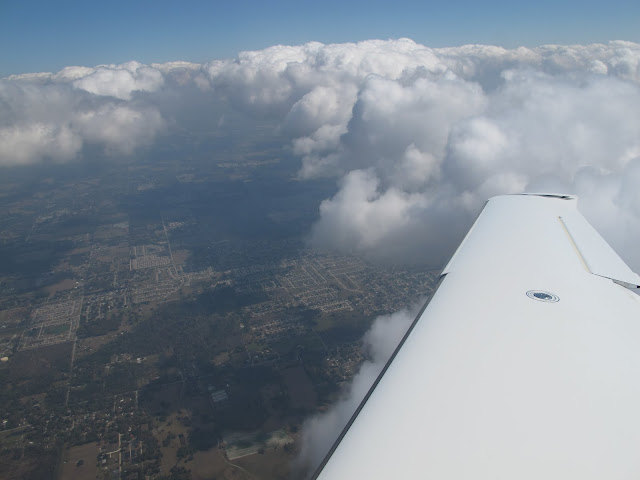 Now it was time to setup for my TFR trick. The Kissimmee Airport has an instrument approach procedure (RNAV GPS 15), which cuts right through Disney's TFR!  As long you get the appropriate clearances from ATC, you can get low enough to get some gr8 views of Magic Kingdom, Epcot and Downtown Disney.  We got cleared down to 2300 FT, which was comfortably below the clouds and enabled Richard to put his new camera to the test. 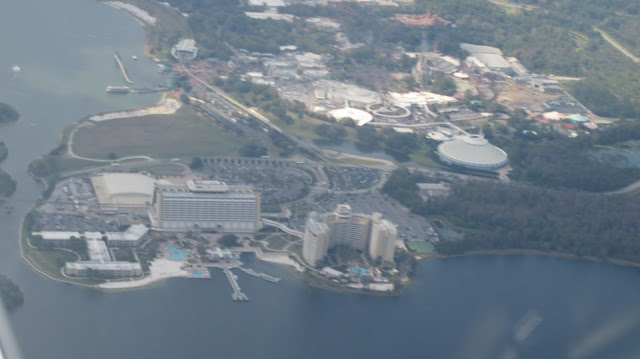 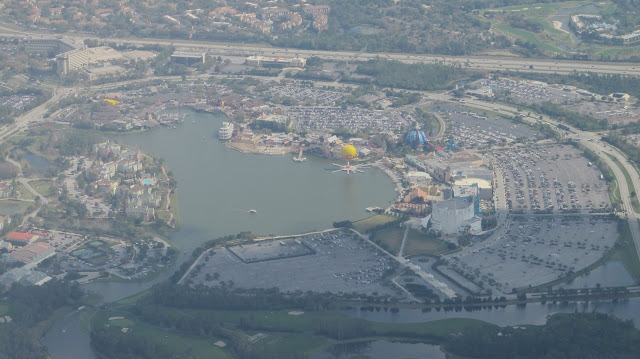 After our Disney flyby, we went missed approach on the procedure and continued direct to Flagler County Airport , where we had lunch @ Hijackers.  On the way back, we had more airspace to deal with.  The restricted area just north of Orlando was active and the Orlando approach frequency was too busy for us to pick up flight following or even a clearance into class B.  As a result, we climbed through another  "whole in the clouds" to get on top of the class B @ 10,500 FT.  After clearing the Orlando airspace, we needed to descend and fortunately found another nice big whole in the clouds.  In order to maintain VFR, we needed to do some steep turns and 360s to make it through the whole. 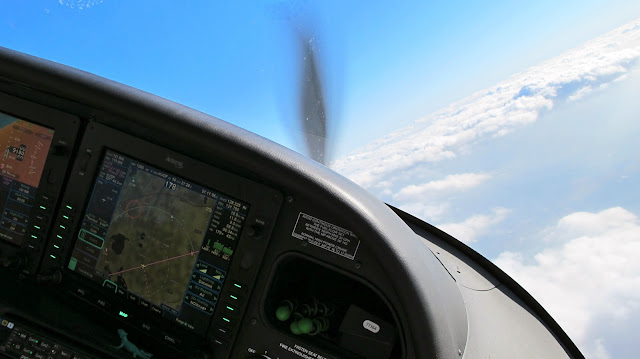 Then moments later, we actually saw a skydiver near Zephyr Hills under a bright red canopy! 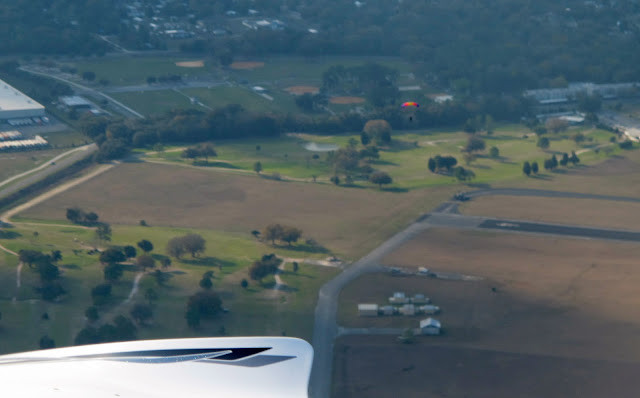 So in the end, Richard still needs a lot of practice with his new camera.  But as you can see, overall mission accomplished for today! 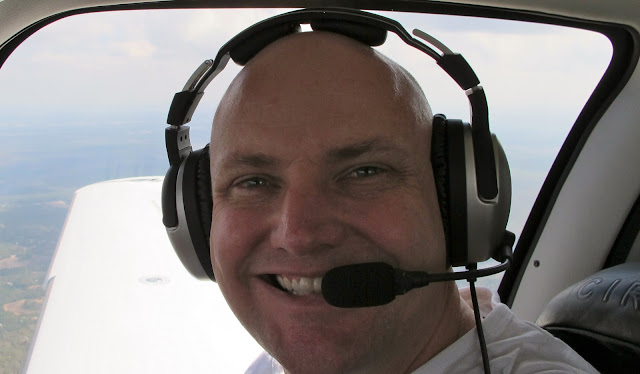 As promised, the guys at Leading Edge came through and finished the annual today right on schedule! Reminds me of the old A-Team quote "I love it when a plan comes together" ;-)
So now it is time to turn my attention to planning the next journey.  Tomorrow, I am planning to go to the EAA Fly-In in Vero Beach, FL with a couple of friends.  While Fly-Ins are always fun, this one has a special twist.
My friend Anupam, who is a pilot and Cardinal owner, is also going to the same fly-in.  So we have decided to attempt a brief formation flight.  (Not a true formation flight... More of an aerial photo shoot)
My route is shown below:

This is a very short 113 nautical mile trip... (But that does not count the detour for formation work.)
Anupam's Cardinal is based in Plant City Airport.  So we can't do a true formation takeoff.  Instead, my plan is to rendezvous with N-29LK in a holding pattern over the Winter Haven Airport.  Why there you ask... First, it is sort of on the way.   Second, it is clearly between Tampa and Orlando's class B airspaces, which means we won't need to worry about ATC clearances.  Third, it is in a scenic area with lots of lakes that should make for a good photo opp.
I read up on formation flying and found that there were surprisingly few rules constraining this activity.  The basics are laid out in FAR 91.111.  However, there is a bunch of training material available about how to do it well and do it safely.
Our plan is rather simple.  We will fly at prearranged altitudes (with 500 FT separation) until we can see each other.  Then establish radio contact on the 122.75 frequency.  I used to think that 123.45 was the appropriate air-to-air frequency.  But it is NOT.  While 123.45 is usually quiet, it is definitely NOT designated for this type of conversation. The correct frequency is either 122.75 or 122.85.
After we have established visual and radio contact, then we will proceed "together" to Vero Beach (of course with a few maneuvers for the camera)
Hopefully, I will be able to post some cool photos and/or videos tomorrow.
Cheers,
== T.J.==
at February 11, 2011 No comments:

After last week's "heavy flying" week, this was a no flying week (except for JetBlue).  I needed to be in New York for some IBM business.  As usual, I felt the urge to multi-task and decided that this was the perfect week to get the annual inspection done on the Cirrus.  The annual is not due till next month ... But since I was out of town anyway, I thought it was the perfect timing.  Besides... I would feel much more comfortable going to the WFIF event next month with a fresh annual.
Luckily, the folks at Leading Edge were able to accommodate my last minute request and said they "hoped" to finish by Friday "depending on what they find".  Like many aircraft owners, the annual inspection usually strikes fear in my heart.  While the plane has no known squawks, who knows what they will find when they start taking things apart.  Worse yet, who knows how much will it cost!
So when I returned home to Tampa today, I called the folks at Leading Edge to see how it was going...
This is what they showed me: 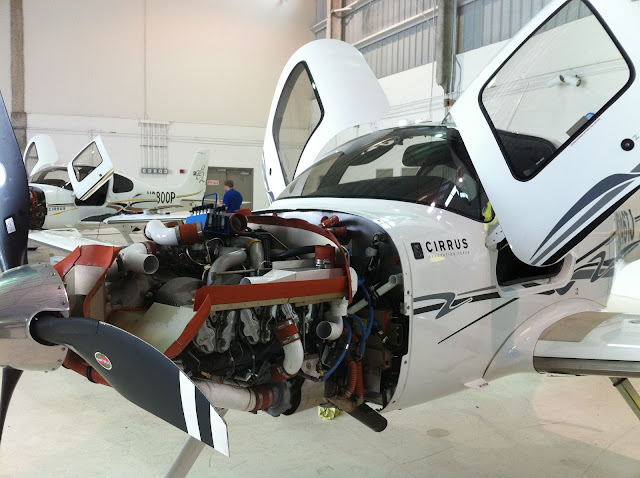 While the picture was downright painful for me to see, they told me some gr8 news!!  After the complete annual inspection, the only material item that needed attention was the left main tire, which needed to be replaced.  As you can see, they were almost done with that today: 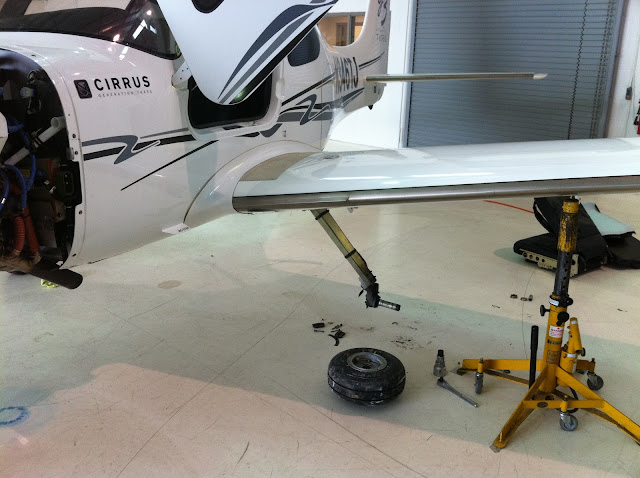 By tomorrow, they tell me that it will be washed and back in my hanger.
That is absolutely perfect timing.... On Saturday, I am planning to go to the EAA fly-in in Vero Beach and on Sunday I am planning to do an Angel Flight from Pensacola to Miami for 2 year old boy that needs to get to Miami Children's Hospital.
So overall, my anxiety is greatly relieved and I can happily say ... "Another year's annual drama done!!"
at February 10, 2011 No comments:

Email ThisBlogThis!Share to TwitterShare to FacebookShare to Pinterest
Labels: maintenance

This was a busy flying week indeed... After coming back from Miami, I managed to squeeze in an Angel Flight.  I was a little nervous about this one because it was my first Angel Flight in IMC.  The ceilings in Tampa were ~ 1000 FT and recent PIREPS showed even lower in the area.  In addition to the cloud cover in Tampa, the radar showed an ugly line of RED/YELLOW/GREEN about halfway along our route.  The only good news on the weather was that the PIREPS near Cross City reported smooth air near the altitude I was planning.
The patient (Chris) was a cancer patient, who lives in Panama City, FL and is participating in a clinical trial at the Moffitt Cancer Center in Tampa.  She was so grateful for the 1.5 hour flight home, which meant she could avoid the grueling 8 hour drive.  I warned her that due to the weather, it may get a bit bumpy and we will likely be in the clouds the majority of the time.  She was not concerned.  She had been on many small planes before and knew generally what to expect.
So we picked up our IFR clearance on the ground and took off into "the soup".  Shortly after takeoff, we "found just the right altitude" thanks to a cooperative ATC controller.  We were able to enjoy a smooth ride between layers of clouds. 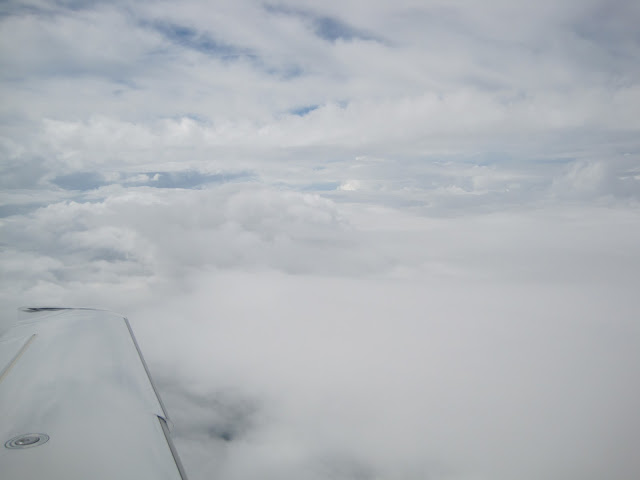 As we passed Cross City, I noticed that the line of storms I was worried about had moved East faster than expected!  That meant we were able to easily dodge the rest of the clouds with just a couple of minor deviations: 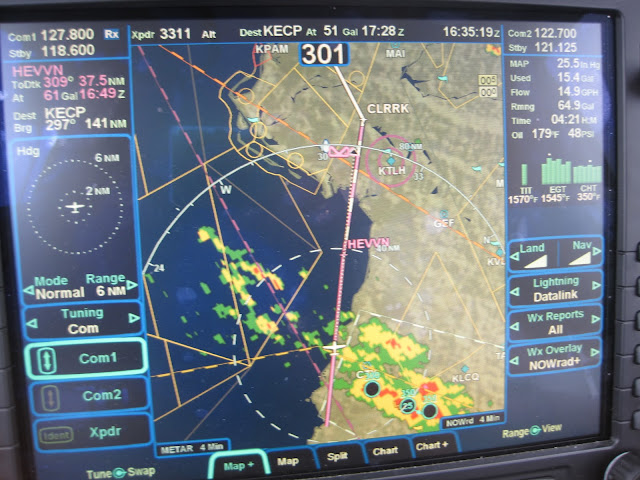 Luckily, the radar picture looked far less scary in the plane than on the ground.  Best of all, after another 15 minutes all the weather was behind us.  Then it was just sightseeing and photos: 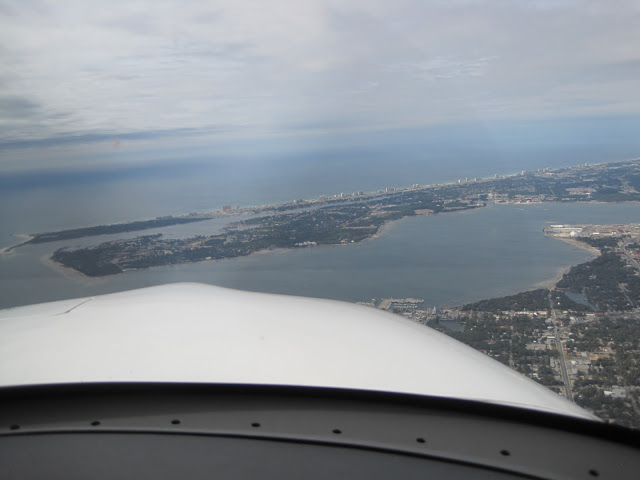 As we approached Panama City, the weather was no factor.  But I wanted to practice some more video editing.  So I setup the camera and shot the GPS 34 approach onto their enormous 10000 FT runway.  Just for kicks, I even did a "short field" landing on the first 2000 FT.
After we landed, the folks at the SheltAir FBO took very good care of us. While this "new" Panama City airport still feels like it is under construction, they are definitely OPEN for business!
Cheers,
== T.J.==
at February 06, 2011 No comments:

Normally, I work from home... But today was different.  A number of my IBM colleagues were in Miami today.  Since they were "in the neighborhood", I felt compelled to go work from Miami for the day.
In typical IBM fashion, I have grown accustomed to collaborating with colleagues from around the world, who I rarely ever meet face to face.  So today was truly a rare treat!
I arrived at the Tampa Executive Airport early (even before the line guys were there) and began to do a pre-flight inspection. 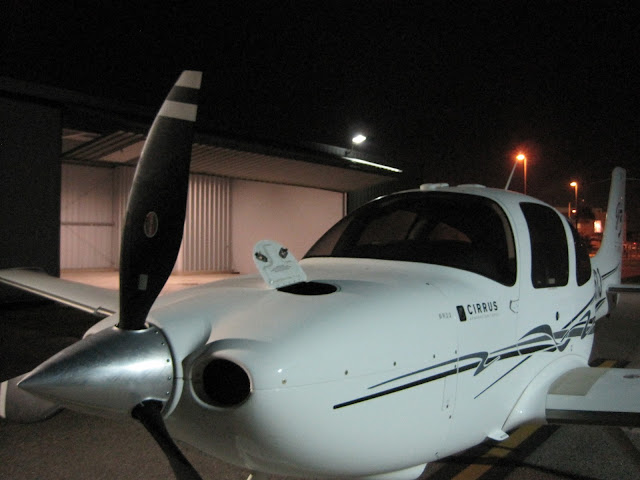 Doing a Preflight in the dark is a bit of a challenge.  I walk around with a small flashlight and try to be extra careful.  After a clean checklist, it was time to taxi out 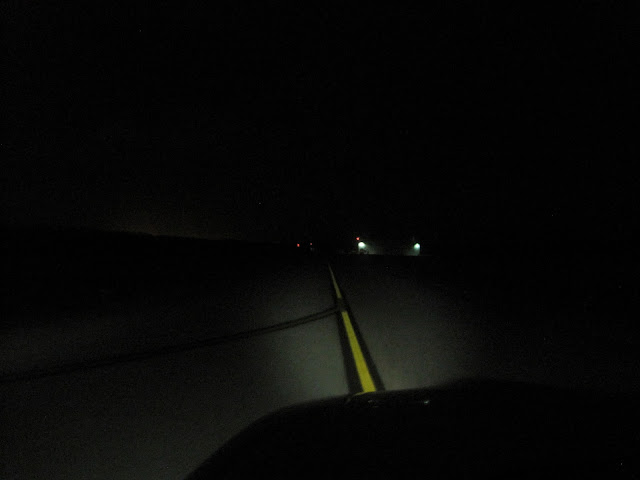 Since the ATIS reported clear skies and tame wind, I took off VFR.  Takeoffs in the dark are a little like takeoffs in IMC, which is not that difficult.  But you have to be "on the instruments"!  Shortly after takeoff I picked up IFR with Tampa approach and they gave me a fairly direct routing to Kendall-Tamiami Airport @ 7000FT.  While enroute, the sun came up just left of the nose.  I tried hard to capture the sunrise on camera: 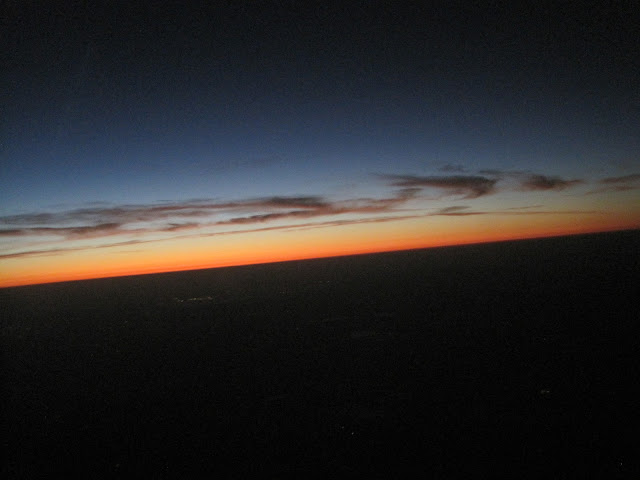 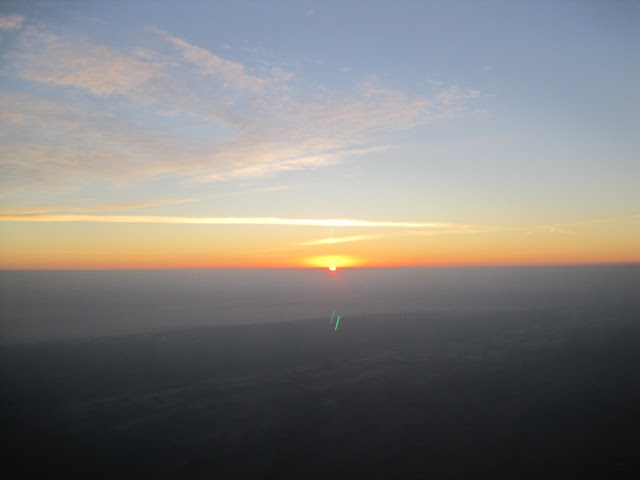 I landed a few mins before 730... Just in time for my friend Reinaldo to pick me up and get to the office in time for our first meeting!  Luckily the runway was not lined up directly to the sun.
After a packed day filled with meetings, I now have a major dilemma.  Do I fly home right after work or stay for dinner and do a really late night flight home?  Hmmm...What a tough choice...
Any suggestions?
Cheers,
== T.J.==
at February 02, 2011 No comments: