Day 1 went off "almost" as planned.   I was so excited to begin my journey.  I arrived a couple of hours early to the airport so that I could do a thorough pre-flight and still have time to "correct" anything that may have needed attention.  Luckily everything checked out OK and after a whole bunch of work calls/emails, I was ready to go.
After taking off VFR, I contacted Tampa Approach to pick up my IFR flight plan.  Despite the "cleared as filed" clearance I received, ATC seemed to have other plans for me! After numerous "scenic" vectors, finally I was cleared to Taylor (TAY) > Waycross (AYS)>direct destination.  I didn't mind at all, because this new routing has even better (more direct) than what I originally filed and kept me clear of some pesky military airspace.
I got cleared to 16000 FT pretty quickly and eventually to 17000 FT.  At that altitude the ride was sooo smooth!
After playing with the sat radio and camera for a while, I decided to try my hand at taking a couple of in flight videos.  Haven't had time to edit them yet. But hopefully I can get them cleaned up on YouTube later this week.
After a couple of quick hours, I landed in Duplin County Airport (KDPL), which is one my favorite fuel stops.  (Didn't really need to stop there... I could have easily kept going to RDU... But I needed a break and it was a good excuse to stop at Andy's Burgers, which is a little greasy spoon, with a cool 50s style atmosphere right next to the airport.
After a little break (and some calls/emails, etc) it was on to the final, short leg to RDU.
As the weather forecast had predicted, there was a lot of low level turbulence and gusty winds, which really made for tough landing.  But by that time, I was motivated to get down on the ground.
Karishma and Arjun (and of course their Dad) were there to greet me. 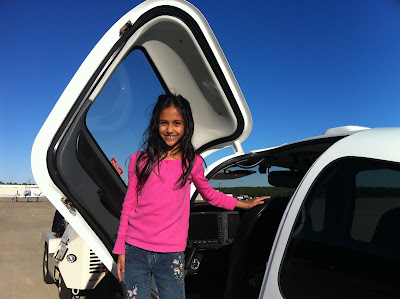 Here is Karishma posing on the plane: 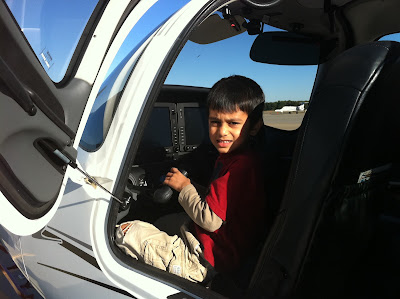 Here is Arjun pulling back on the side stick (trying to takeoff):

Had a great evening in Raleigh!  No new states yet.. But I am recharged for Day 2 where I will hopefully land in 3 new ones!!
So far, here is the progress on the trip: 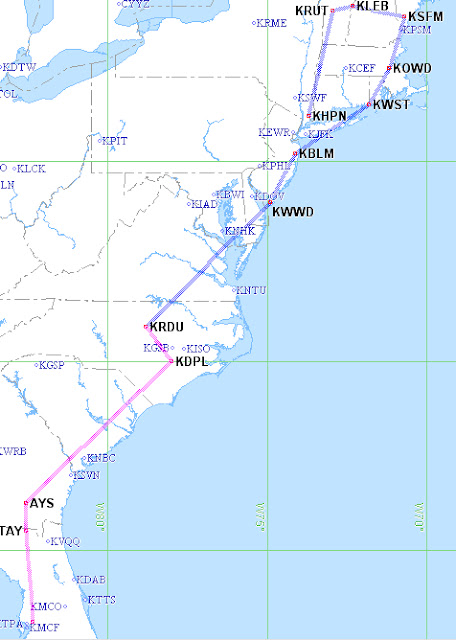